It’s a case of kilts aff lederhosen on as Oktoberfest lay out the Bavarian welcome mat to the beer loving folk of Aberdeen.

With the promise of German Schnitzel and a very big tank of lager specially brewed for Aberdeen palates by the good people of Bavaria, the five-day fest is ready to roll.

Starting from 4pm this Wednesday, you can head along to Union Terrace Gardens to grab your frothy tankards, some Bavarian potato salad and dance your Bavarian breeches off.

Here’s a short survival guide to see you through the festivities.

Why are the Bavarians bringing us their beer and pretzels?

Oktoberfest has a long tradition which started in Munich 200 years ago.

After gathering in the harvest, the villagers would meet under a large blue and white tent and drink well deserved beer in giant sized portions.

Dancing and general sing-along sessions would ultimately follow, as happens on most occasions where giant kegs of beer are found.

In 2011, the Bavarians discovered the British like beer and a sing-a-long too – and now they’re spreading the fun to us northerners. 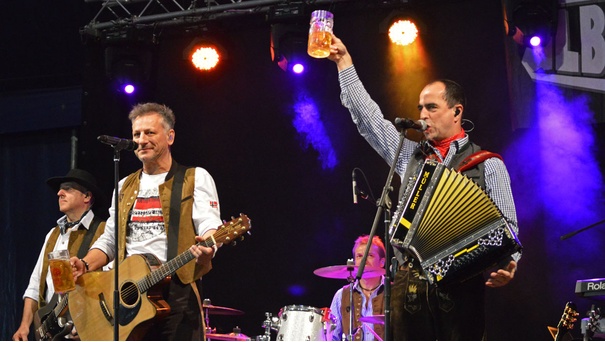 How should I wear my lederhosen?

The answer is ‘with great pride’ and your shirt tucked in.

Traditionally these fine leather breeches were used as workwear for the tough working-class men of the alpine regions and are of great regional pride to European knees happily used to the fresh air.

The top of the range ones have some fancy swirly embroidery going on too, so choosing a pair is certainly fun.

According to those who have experimented with both kilts and lederhosen, it’s apparently easier to pick up girls if you don the tartan.

Read author Gary Robson’s Kilts vs. Lederhosen blog debate if you’re not sure.

To become a genuine Bavarian this week, you can rent original dirndl or lederhosen at the venue for only £29.

What do you eat at a Bavarian beer festival?

Schnitzel is a slice of juicy boneless meat, coated in breadcrumbs and fried. Think of it as a sort of flattened but tastier chicken nugget.

Wurst are the Mister Universe equivalent of the sausage world. Imagine a chipolata that’s spent ten years bulking up.

Brezel are pretzels, which are a salty and delicious knotted baked delight and Haxen is a massive roasted pork shank dish that always goes down well with the Oktoberfest crowd.

We have it on good authority that the Bavarian potato salad is pretty good too.

What are some good Bavarian dance floor moves I can pull?

According to one of the organisers we spoke to recently, Julie Bui, German band Münchner Gaudiblosn are coming over to perform modern Schlager music.

This means all the greatest hits plus a step by step guide from the band themselves on how to correctly hold a beer glass while dancing to traditional Bavarian songs thereby incurring minimal spillage.

The tent has space for 1,500 people, so that’s a lot of potential dancing buddies.

Entry is free on Wednesday and Thursday, Friday and Sunday tickets are set at £5.

On the Saturday there will be a £10 entrance fee and beer and food can be purchased.

Alternatively you can get the whole Bavarian package with food, beer and seat reservation for £34 (£39 Saturday).

Now please, please send us those pictures of you in your lederhosen – Tweet them to us or send us them in using the STV Aberdeen app.

And don’t forget to show off those knees with full Bavarian pride.

We’ve updated our app to give you an even better experience. It’s packed full of everything happening in Aberdeen including all the latest news, brilliant events and great places to eat. If you enjoyed this page, why not get the app on Android or iOS?